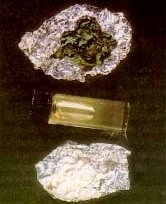 Phencyclidine, more commonly known as PCP, is illicitly marketed under a number of street names including Angel Dust, Supergrass, killer Weed, Embalming Fluid, and Rocket Fuel. PCP use reflects a range of bizarre and volatile effects.

PCP (phencyclidine) was developed in the 1950s as an intravenous anesthetic. Use of PCP in humans was discontinued in 1965, because it was found that patients often became agitated, delusional, and irrational while recovering from its anesthetic effects. PCP is illegally manufactured in laboratories and is sold on the street by such names as “angel dust,” “ozone,” “wack,” and “rocket fuel.” “Killer joints” and “crystal supergrass” are names that refer to PCP combined with marijuana. The variety of street names for PCP reflects its bizarre and volatile effects.

PCP is a white crystalline powder that is readily soluble in water or alcohol. It has a distinctive bitter chemical taste. PCP can be mixed easily with dyes and turns up on the illicit drug market in a variety of tablets, capsules, and colored powders. It is normally used in one of three ways: snorted, smoked, or eaten. For smoking, PCP is often applied to a leafy material such as mint, parsley, oregano, or marijuana.