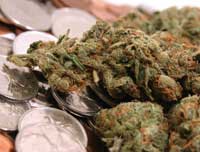 Marijuana is the most frequently used illicit drug in America today. The term marijuana, as commonly used, refers to the leaves and flowering tops of the cannabis plant.

Marijuana is a green or gray mixture of dried, shredded flowers and leaves of the hemp plant Cannabis sativa. There are over 200 slang terms for marijuana including “pot,” “herb,” “weed,” “boom,” “Mary Jane,” “gangster,” and “chronic.” It is usually smoked as a cigarette (called a joint or a nail) or in a pipe or bong. In recent years, it has appeared in blunts. These are cigars that have been emptied of tobacco and re-filled with marijuana, often in combination with another drug, such as crack. Some users also mix marijuana into foods or use it to brew tea.

The main active chemical in marijuana is THC (delta-9-tetrahydrocannabinol). In 1988, it was discovered that the membranes of certain nerve cells contain protein receptors that bind THC.