Alcohol: The world’s most popular drug, legally used in most countries. Alcohol is produced through the fermentation of fruits, vegetables and grains.

Amyl Nitrite: This drug is a yellowish, volatile, inflammable liquid with a fruity odor called ‘snappers’ or ‘poppers’, as they come in glass capsules that are broken. It is used for heart problems as it dilates the coronary arteries, allowing more oxygen to reach the heart. Currently, other vasoditators are preferred such as nitroglycerin “poppers”. They are often used in an effort to enhance sexual climax.

Antibiotics: These are anti-infection drugs that inhibit the growth of or destroy microorganisms and are used extensively in treating bacteria-caused diseases.

Antihistamines: These drugs block the effects of the allergy chemical, histamine, and relieves sneezing, watery eyes, runny nose and itching of the nose and throat.

Barbiturates: Drugs commonly used to calm nervousness and induce sleep and are derived from barbituric acid.

Cocaine: A bitter, crystalline drug obtained from the dried leaves of the coca shrub; it is a local anesthetic and a dangerous, illegal stimulant; the primary psychoactive ingredient in the coca plant and a behavioral-affecting drug.

Codeine: This drug is a derivative of the opium poppy much like morphine, but is less powerful than morphine or heroin. Codeine is often used for cough relief.
“Crack” Cocaine: The chemical cocaine is found in the oil of the coca plant leaf; when processed, cocaine is chemically turned into a water-soluble powder form called “cocaine hydrochloride”; ‘Crack’ cocaine, much like “freebasing” cocaine, is cocaine powder that has been turned back into an oil form of smokable cocaine.

Cutting Agents: These are various powders that are used to dilute cocaine, heroin and other drugs used in powder form. Lactose (‘milk sugar’) is an example, another is mannitol.

Demerol: This is a synthetically produced narcotic that acts like morphine or heroin.

Dilaudid: This drug is a semi-synthetic opiate much like morphine.

Ergot: This is the name of the fungus Claviceps Purpurea that grows on wheat and rye plants and is often referred to as ‘wheat rust’; LSD comes from the ergot fungus.

Hashish: Cannabis preparation more potent than marijuana. This comes from the resinous secretions of the marijuana plant’s flowering tops.

Hashish Oil: The extracted oil of the marijuana plant and is usually dark and sticky.

Baby Hawaiian Wood Rose: The seeds of this plant, commonly found in dried plant arrangements, have a lysergic acid derivative; The effects of this drug usually cause nausea and vomiting as well as hallucinations.

Heroin: A powerful narcotic that is derived from morphine.

Honey Oil: The same as hashish oil except it is clear and looks much like honey does.

Ice: A smokable form of methamphetamine. By smoking the drug the effect on the body occurs more quickly.

Inhalants: There are a number of substances that produce strong intoxicating vapors such as paint, paint thinner, modeling glue, gas liquid whiteout, magic markers and many others. These substances are very dangerous and are often used by young people.
Jimsonweed: This is a name for the plant Datura Stramonium or sometimes called ‘locoweed’. This plant contains the powerful poisonous hallucinogens atropine, scopolamine and hyscocyamine.

LSD: These letters stand for d-lysergic acid diethylamide. This chemical was synthesized from ergot in 1938 by Albert Hofmann of the Sandoz Laboratories in Switzerland; a powerful hallucinogen whose effective dose is 200 to 400 micrograms, a mere speck in size.

MMDA/MDA: These two chemicals are derived from nutmeg, properly named Myristica Fragrans. They are both hallucinogenic and their use is illegal. Another derivative MDMA or ‘Ecstasy’ was one of the original ‘designer drugs’ in which the molecule was altered enough to get around the law, the effect was virtually the same as its predecessors.

Morning Glory Seeds: Like the Hawaiian Baby Wood Rose, it contains a lysergic acid derivative and is hallucinogenic.

Morphine: Is a powerful narcotic that comes from the opium plant. Heroin is derived from morphine. This is named after the Greek god Morpheus, the god of sleep.

Nicotine: This is the drug found in tobacco.

PCP: The full name of this drug is phencyclidine. This drug was first developed to be used as a human anesthetic, used only today as a veterinary tranquilizer. Can be produced easily with common industrial chemicals.

Percodan: This is a synthetically produced narcotic that acts like morphine or heroin.

“Persian” heroin: This is heroin in a smokable form. Smoking heroin is often called ‘chasing the dragon’.

Peyote: This is the name of the cacti that contain the hallucinogenic chemical mescaline.

Psilocybe: Often referred to as “magic mushrooms”, this fungus contains two hallucinogens named .psilocybin’ and ‘psilocin’. There are a number of other poisonous and hallucinogenic mushrooms.

Quaaludes: A synthetic sedative drug that was once thought to be safer than barbiturates and in the 1970s became the most frequently prescribed sedative-hypnotic.

Sinsemilla: There are male and female marijuana plants. The flowers of the female marijuana contain the highest concentration of THC. Growers have learned that if the female plants are not allowed to be pollinated the flowers cluster and excrete greater quantities of resin. Marijuana grown like this is called “Sinsemilla” which simply means “no seeds”.

STP: This synthetically produced hallucinogen is a variation of mescaline and amphetamines. Generally less potent than LSD, but it takes longer to breakdown in the body and therefore lasts much longer, in some instances 24 hours to several days.

Tobacco: The leaves of the tobacco plant are smoked in cigarettes, cigars, pipes and chewed as chewing tobacco. Tobacco contains the drug nicotine.

“I learned that drugs aren’t everything they are built up to be. Drugs have taken away two of my closest friends. I will never try them they are not worth it.” – M.H.

This is a compilation of some of the most frequently asked questions by kids after a presentation. This should give parents a valuable insight as to what kids want to know about. The answers are given to provide parents with information they can use to talk to kids about drugs.

Q) “Do drugs ruin your memory?”
A) Yes. When a person takes drugs the pictures recorded in their mind at that point in time are fuzzy or foggy or even blank. Some drugs scramble the sequence of pictures in the mind, making it hard to remember something that happened in the past.
Q) “If drugs are so bad, why do people sell them?”
A) Greed. Drugs are a multi-billion dollar industry and some people care more about themselves and money then they do about others.
Q) “If my mother or father have a drink, will it hurt them?”
A) To say that something is all bad would be silly. For instance, it has been said that a very small amount of alcohol helps blood circulation and food digestion. But many believe that it is better not to drink at all because a problem with alcohol may develop and often does with many people.
Q) “What is the worst drug?”
A) A drug called LSD (or acid). LSD scrambles the pictures in the mind which can be very difficult to overcome and affects the person for a very long time.
Q) “How do people get addicted to drugs?”
A) Drugs kill all types of pain: physical, emotional, mental. When the drug wears off the pain comes back stronger. The person doesn’t notice the difference, but needs more drugs to kill the pain. The more he takes, the more he wants. Until finally he doesn’t just want the drug, he needs it to get rid of the pain created by the drug.
Q) “I heard that marijuana makes you more creative, is that true?”
A) No. It appears to the drug user that he’s more creative because he feels more open about things, especially the first few times he uses the drug. Drugs are basically poisons, and they have been proven to kill creativity.
Q) “If alcohol is so bad, why do so many people use it?”
A) One reason is advertising. The alcohol industry has been around a long time. There is an enormous amount of money being made from the sale of alcohol and these sales are promoted through advertising. The beer commercials are some of the most expensive ones.
Q) “Are drugs expensive?”
A) Yes. Besides the possibility of dying from taking them, we have known people who have spent over one-half of a million dollars on drugs.
Q) “Do men use drugs more than women?”
A) It’s about the same. Men, women, young, old, rich and poor. All kinds of people have problems with drugs.

“Today we learned how bad drugs are for you. Marijuana never seemed like such a big deal to me, but now I see the problems that it causes. Drugs are always around. You never really know the problems they cause by the way people talk about them.” – A.S.

What Professionals Are Saying About Narconon Drug Education

“I would like to thank you for your outstanding presentation. It was truly one of the most informative programs and a boost to the Boys & Girls Club. It’s people like you that make a difference in a child’s life.”
Executive Director
Boys & Girls Club of Oyster Bay

“Mr. Wiggins was phenomenal in his approach to kids. He should be highly commended. The Narconon program is an excellent source of information and education for kids and their parents.”
Principal
James L. Mulcahey School

“This Truth about Drugs presentation was the best of many talks about drugs that I have heard over my 30+ years as a school counselor.”
Assistant Superintendent
Quabbin Regional School District

“After listening to the Narconon® lecture I know that drugs are not an answer to problems, they only make them worse in the long run.” – J.K

“Today I learned that drugs can ruin your life after one incident. They can’t solve any problem.” – J.H 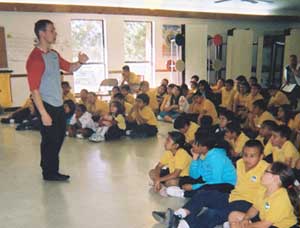