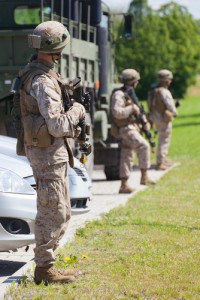 In today’s busy world, job-related stress and anxiety is not uncommon.  Long hours, tight deadlines and tense deals can all contribute to an individual’s on-the-job stress and can spill over into their private life, making it difficult for them to relax, unwind and rest.  But no matter the degree of stress any career individual may experience, it is nothing compared to the stress and anxiety experienced by soldiers returning from war.

The Burden of War

Stan and Shirley White have experienced first-hand the highly damaging effects created by war.  Their older son Bob was killed in Afghanistan, but it is their younger son Andrew’s death that has them truly reeling in heartbreak and anger.

Andrew survived his nine-month deployment to Iraq.  What he failed to survive was the resultant mental and emotional pain and stresses of the war.  Following his return home, Andrew began taking antidepressants, antipsychotics and analgesics like Seroquel, Klonopin and Paxil while under the care of government and private doctors.  The medications were prescribed to treat Andrew’s post-traumatic stress disorder, and while his parents state that they gave him only exactly the amounts that were prescribed by his doctors, the medical report states that Andrew died of fatal drug intoxication.   When the VA investigated Andrew’s death they ruled that his doctors met “the community standards of care”, which essentially means that they feel the doctors did nothing wrong.

This heartbreaking story is one of many, in 2008 three other war veterans in Charleston, West Virginia who were taking similar medications for their post-traumatic stress disorders died in their sleep within weeks of each other.  Upon hearing about the “Charleston Four”, Dr. Fred Baughman, a neurologist in San Diego, began to investigate.  He did not have access to medical files, but was able to create a list of three hundred military deaths linked to sudden cardiac arrest.  Dr. Baughman came to the conclusion that these deaths were highly unusual, seeing as how men in their early twenties don’t just die in their sleep.  His investigation pointed heavily toward the antipsychotic and antidepressant medications being taken, since they are known to cause sudden cardiac deaths.  It is both the medications themselves and the quantity being prescribed and taken that lead to death.

In North Carolina, John and Mary Nahas narrowly escaped tragedy when their son Michael returned from Iraq.  Michael was thin and gray, his mother describing his appearance and attitude like that of a concentration camp victim.  He was prescribed Oxycodone, Xanax, Percocet, Klonopin, Celexa, Lunesta and Ambien to treat his post-traumatic stress disorder.  Mary contacted her niece, a psychologist in a psychiatric hospital, and was told that these medications were a deadly cocktail.  Michael attempted suicide while on the prescribed medications, and experienced changes in personality, cognition and behavior.  His mother says that it was the drugs that messed Michael up so badly.

Stopping the Drug Problem with Troops

In March 2012, the Army Surgeon General testified before a Senate subcommittee about the issue of soldiers getting multiple drug prescriptions.  A Department of Defense memo that has been sent out to all branches of the military cautions medical providers about the use of antipsychotics for post-traumatic stress disorder due to the risk of cardiac effects.  The memo stresses the importance of providers seeking out lower risk medications and non-medication options for post-traumatic stress disorder where possible.

The Whites and Nahas are also on a crusade to stop the epidemic of over-medicating returning soldiers.  They have already talked to members of Congress, the VA and the FDA, and are pushing for a Congressional investigation.  While it cannot bring back their son, the Whites wants to help prevent other military families from experiencing the pain they’ve had to endure, and help returning soldiers find other, non-medication therapies to reduce and resolve their emotional and mental pains.