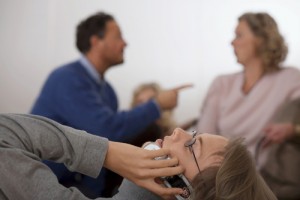 A new study featured in the Journal of Marriage and Family delved into the issue of amount and quality of time mothers spend with their children, and how it affects behavior, emotional wellbeing and academic performance of the child.

The study involved children of two age groups:  3 to 11year olds, and 12 to 18 year olds.  There was a distinction in the type of time a mother spent with a child.  Engaged time was identified as time when a mother was directly interacting with her child or children.  Accessible time was identified as time when the mother was around the children, and available—but doing something else.

The study also looked into time a father spent with his children, and time jointly spent by both parents.

Study results showed-up a zero correlation between the amount of time a mother spent with her children, whether engaged or accessible—and the academic performance or emotional health of the child.  It also showed-up that in most cases, there was zero correlation to behaviors, as well.

The study revealed one exception, and one of great importance.  Researchers found that the more engaged time a mother spent with her teenagers, the less likely those teens were to get involved in delinquent acts.  In this case, delinquent acts were identified as things ranging from lying regarding something of importance all the way to getting arrested.

The study found adolescents to be the most vulnerable group, and the most open to parental influence.

While study researchers did not find a correlation between fathers and the amount of time they spent with their children, engaged time spent by both parents with their adolescent children was found to make a positive difference.

While the influence of developmental psychology on our child rearing practices and priorities directed parental attention to newborns, the importance of adolescence was overshadowed.  The idea that the most important years of parental influence were between the ages of birth and 3 years old were ingrained into the parental culture.

But it is becoming painfully more apparent that adolescence is indeed a vital period of parenting.  Teens still lack the life experience and life skills needed to make their way successfully in the adult world.  Yet they will be faced with many situations and issues that require judgment and decision-making skills.

According to a Science Of Us online article, most adolescents break the rules on school days between the hours of 3 and 6 p.m.; most frequently while at home or at a friend’s house; and when there isn’t anyone else around.

Those are the peak times for smoking, sex, drug experimentation, adolescent arrests, and aggravated assaults.

Despite the assumption of many that teens do not like adult company, that proves-out not to be the case.  In fact, surveys reveal that adolescents wish their parents would talk with them more than they do.

The concept of taking sick leave and pregnancy leave are rather broadly accepted in the work-a-day world of today.  But the concept of adolescent leave—time off from work to spend quality time with a teen child—is not a part of American culture.

With the knowledge that parents are a major influence on the wellbeing and conduct of their teenage son or daughter as highlighted by the above study results, it warrants a close look as a valid need for working parents and their coming-of-age children.

Teens are vulnerable to drug experimentation and the influence of peer pressure on decisions made regarding drug use and alcohol consumption.  An interested, concerned and actively participating parent at home every day when their teen returns from school could go far in preventing substance abuse and addiction.