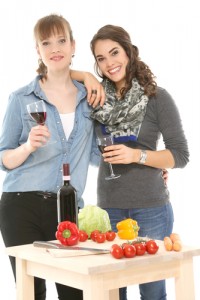 A study out of the University of California San Francisco Center for Tobacco Control Research and Education reveals that friends—and drinking—are related.

The Study: An Overview

A recent Daily News article online reported on a new study linking the size of a group of friends “out on the town” to the drinking of more alcoholic drinks per hour.

Study researchers used smart-phone based assessments throughout the course of an evening to acquire real-life data on young adult drinking behavior.

The study was done on 183 youth in the French-speaking area of Switzerland.  The participating young adults from universities there were contacted via email, and responded by completing internet questionnaires.

On each Thursday, Friday and Saturday throughout the course of the ensuing five weeks, study participants received six messages via text between the hours of 8p.m. and 11 a.m. the following day.  Texts included a link which students used to complete the questionnaire on their smart-phone.  How many drinks they consumed and the number of friends present were included in the questions.

Young people who did not drink at all were excluded from the study, as were those who failed to complete their questionnaires.

Thursdays found young men and women primarily with small groups of friends.  From 8.pm. to midnight, a decline in drinks per hour was reported.

Saturdays found the young people surrounded by the most friends in the hour between 10 and 11 p.m.  Women averaged more than five friends around them, and men more than six.

The study results revealed that the drinks per hour increased with the increase in the number of friends.

According to lead study Johannes Thrul, the study conclusion drawn is that friends and drinking are related.  He notes that a different study design would be needed to further prove-out the findings.  The mechanism connecting higher drinking volume with larger groups was not identified.  Thrul poses the possibility that as the evening progressed and study participants got drunker, their drinking reports may have become less accurate.

Timbos Institute in Utrecht, The Netherlands Youth and Risky Behavior department head, Ninette Van Hasselt, commented on the study.  Her opinion on self-reported drinking is that it may not be very accurate, due to its reliance on the person’s recollection as to the amount consumed.

Van Hasselt commented further that though this study involved primarily well-educated individuals, it is important in that it applies to realistic night-life drinking situations.  She noted that nightlife “social processes” appear to encourage more drinking.

Van Hasselt, though not involved in this study, extrapolated that a likely explanation for the results may be that social status has bigger impact in larger groups, resulting in greater “risk behavior”—like drinking.  Her viewpoint is that the drinking risk behavior “can contribute to one’s status.”

She further proposes that the social influences and processes involved could influence the drinking to increase with the increased size of the group, noting the people are often unaware of such influences.

On the issue of social status, van Hasselt maintains that risky behavior as a means to gain social status is more important for men in comparison to women.

Opinions, extrapolations and suppositions aside, what can be known is that those who seek to limit their alcohol consumption should stay away from nightlife settings, group drinking situations and partying with their drinking friends.  That is just good old common sense.