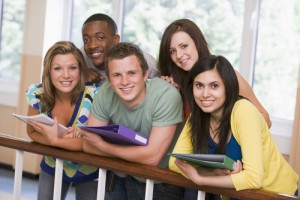 The 2014 American Freshman survey conducted by the Cooperative Institutional Research Program (CIRP) and the Higher Education Research Institute at UCLA showed-up some interesting differences between the current group of college freshman compared to their older peers.

The national survey conducted by researchers at the University of Southern California Los Angeles (UCLA) found that the current college freshmen who were entering their teens during the economic fallout of the recession to be more concerned with financial success; and to party less.

Aspirations to enhance career prospects with graduate school attendance showed-up in the survey, as did taking academics more seriously.  That today’s college freshmen applied themselves to study and academics even before college is evidenced in the survey, as well.

The survey has been conducted for 49 years by the Higher Education Research Institute at UCLA.  Interim managing director, Kevin Eagan, noted that it remains unclear whether this group’s reported relative abstinence during high school will prove them to be a tame group.  He pose it could mean the temptation to get into other trouble or binge drink may be greater now they are away from home.

The survey also showed-up this group of college freshmen reporting higher levels of depression and other emotional issues.

Both frequent and occasional beer drinking showed a decrease amongst this current college freshmen group, with 33.5% reporting compared to 45.5 % a decade ago; and 69% three decades ago (1984).

The CIRP survey was taken primarily during summer orientation last year at 227 four-year colleges, and by 153,000 students.

On a positive note, the survey found this current group of college freshmen to be ambitious.  They also reported becoming financially well-off to be very important—or essential, with a record 82% response.  Before the 2008 recession, 77% responded in kind to the same question.

Interesting factors revealed by this survey found these college entry-level students aspire to a master’s degree (44%), a survey record.  Those wanting to earn a professional or doctorate degree was also at a new high.  In the last decade, interest in law school has dropped, while interest in medical school increased.

According to interim managing director Eagan, these youngsters saw the result of the 2009 economy crash, including college-educated individuals losing their jobs. He suggests their belief in needing more money to remain comfortable and having seen a bachelor’s degree may not be adequate, fuels their desire for a good salary post-graduation.

Partying less, drinking less, and refraining from drug use will go far in helping these college freshmen achieve their dreams and goals.