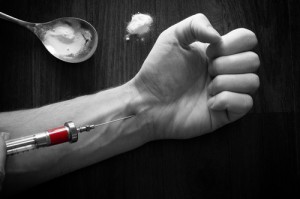 It is commonly known that there are only three possible outcomes for addicts.  It is going to be sobriety, prison—or death.  A new study published in the Journal of Substance Abuse Treatment reported the death rate for heroin and cocaine users as 14.3 times higher than the general population average.  The study highlights the mortality risks associated with using these illicit drugs.

A University of Manchester study of nearly 200,000 heroin users found that older opioid users—such as heroin users—are 27 times more likely than the general population to end-up a homicide victim.

The University of Manchester study done in England is the largest ever undertaken on opioid users.  It was published in the journal Drug and Alcohol Dependence. Records of 198,247 people who had been involved in either the criminal justice system or involved in drug treatment between 2005 and 2009 there were used for the study.  During this time period studied, 3,974 deaths were recorded as part of the data.

The University of Manchester study is the first to record the age trends in opioid-user mortality.

The study results showed that that the many health inequalities existing between the general population and opiate users widens with age.  In comparison to what would be expected in a general population, homicide was found to be 27 times more common in the oldest age group of persons aged 45 to 64 years.

The study identified drug poisoning as the most common cause of death, with increasing risk as users aged.  Study leader, Dr. Tim Millarof the University’s Centre for Mental Health and Risk, noted that opioid users need the newly found information on overdose which emphasizes that the risk of their overdosing increases with aging.

Millar further noted that the particular age group is one of the most homicide vulnerable, pointing out it is a rate “staggeringly higher” than that of the general population.  He found it apparent that the older opioid users are one of society’s most vulnerable groups, but that the majority of treatment programs do not differentiate by age.

More causes of death highlighted by the study included respiratory disease such as pneumonia, circulatory disease and liver diseases, all of which were found to be much more common amongst users of opioids in comparison to the general population.

It was recognized by the research that drug users are frequently in situations with poor housing and poor diet.  The fact the drug users may also have other addictions such as alcohol or smoking were not taken into account as part of this research study.  However, because the research was not limited to people who had sought treatment, it incorporated more users than was possible in earlier studies.

According to Dr. Millar, the large number of individuals in the United Kingdom who had become users in the 80s and 90s are now getting older.  He notes that as this group of users continues to age, the health gap between the general population and the users increases.  He emphasizes the need to develop specific programs focusing on informing and treating this group.