Study Finds Flakka to be More Addictive than Meth 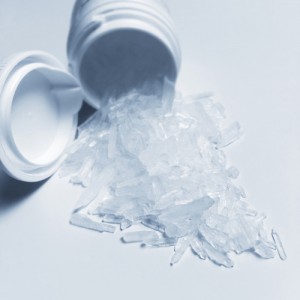 Flakka is a designer drug ordinarily made from the chemical alpha-PVP—a synthetic version of the stimulant chemical cathinone.  The cathinone chemicals are derived from the Middle Eastern and Somalian khat plant, where the leaves of the plant are often chewed to get a euphoric buzz.

Flakka is usually made from alpha-PVP, a chemical that is a synthetic version of a cathinone. Ccathinones are amphetamine-like stimulants.  Bath Salts, notorious for their connection to a number of bizarre and alarming incidents, are in the same class of chemical used in making Flakka.  The effects of cathinones—both immediate and long-term—vie with those of the strongest cocaine and crystal meth.

Flakka and bath salts have both been linked to feats of aggression—sometimes fatal—and bizarre zombie-like behavior.  There have been news reports of an individual high on Flakka breaking into a police station, or one impaling himself on a fence—both indications of the drug’s extremely adverse effect on the mind.

Study researchers followed-up the original testing with a test comparing the number of times the test rats were willing to press the lever for flakka in comparison to bath salts.  According to TSRI Associate Professor and senior co-author of the study, Tobin J. Dickerson, the study showed flakka to be as potent as bath salts; and with addiction liability worse than methamphetamine.

Another factor of concern to researchers is the low cost of flakka.  The cheap high of $5 per dose could end-up in devastating consequences for those who get hooked.

Dickerson points out that drugs such as meth and flakka aren’t just “made in garages anymore.”  On the contrary, there is an underground drug market making use of sophisticated labs—part of an extensive network—making it difficult for law enforcement to track down the manufacturing source(s).

While states attempt to mitigate the damage by banning chemicals/substances used in manufacturing synthetic drugs such as flakka and bath salts, those who manufacture and deal in such drugs change the formula, or put out a new synthetic drug on the market.  This tactic enables them to evade the law, and to continue to manufacture and deal their drugs.The dangers and risks to the user do not change with the formulations–but seem only to worsen.

Until 2014, flakka was legal in the U.S., at which time the DEA implemented a temporary ban.  While the ban is not yet permanent, many believe the increasing prevalence of the drug will prompt a permanent ban.  Bath salts (originally known as MDPV) were made illegal in 2011.  Flakka is a slight variation of the bath salts design.

Flakka has earned the moniker of “$5 Insanity” and the “Insanity Drug” in some circles.  Its increasing prevalence in South Florida raises concern that it will spread throughout Florida and to other states, as do most illicit drugs that prone to abuse, and addictive in nature.