Studies Show One in Four Kids Exposed to Drinking 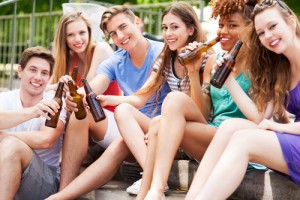 A large part of keeping your children healthy and happy is keeping them safe from harmful influences. You don’t let your kids run out into a busy street, and you don’t let them touch a burning hot stove. In the same vein, you shouldn’t allow your children to be exposed to heavy drinking.

A study published in the American Journal of Public Health found that one in four children was exposed to alcohol abuse or full-blown alcoholism before the age of 18. This means that at least one person in the family was an alcoholic for 25% of America’s children! This is a very poor influence to have around children that are looking up to adults and learning how they are supposed to act when they grow up.

Children are incredibly impressionable. Whether you realize it or not, children begin mimicking adults at an early age, and it’s not long before a good portion of their behavior has formed around the impressions they’ve made from their role models. If the role models around a child are alcoholics, there’s a much greater chance that he will grow up to be an alcohol abuser, too.

This is not because alcoholism is some kind of disease, because it isn’t. You can’t catch it from someone else. What can pass from person to person is a pattern for living. Young people can see that the adults around them drink heavily, so this forms a pattern for future behavior, whether or not they consciously realize it’s there.

If you want to keep your children safe from alcohol, you have to take this information into account and act sooner rather than later.

Setting Children on the Right Path

Young people might claim that they’re not listening to adults when you talk to them about serious subjects, but they actually are. Studies have shown that parents are incredibly influential in how young people end up living their lives. Parents that talk to kids about drugs and alcohol can prevent a lifetime of unhappiness. It starts with education.

Parents can’t just tell their kids, “Don’t drink and don’t do drugs.” When they put it that way, they’re just making drugs sound interesting. No real reason is being given to not use these substances. If anything, that kind of speech is giving alcohol and drugs an alluring sense of mystery.

Instead, parents should work to educate their kids on what drugs and alcohol actually do to the human body and mind. When kids have all the details of how drugs and alcohol can harm the body, they can start to make good decisions about not participating in using these.

After young people have been educated about the very real dangers of using alcohol, you still need to monitor situations where they may be exposed to it. For young children, this could be as simple as making sure that they don’t have access to alcohol by finding it in the fridge or in another easily locatable place.

For older children and teens, this could mean keeping an eye on who they’re hanging out with and where they’re going. You have every right as a parent to prevent your teenager from going to parties where you know there will be lots of alcohol. You do not have to let your child get exposed to binge drinking and the risky behaviors that go with it. Keep your children from being exposed to alcohol, and they are almost guaranteed to have less trouble with it later in life.