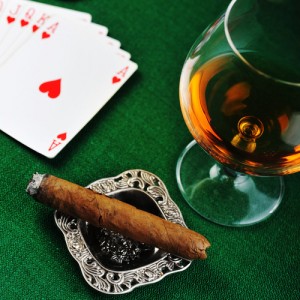 When someone engages in a self destructive activity, it is uncommon that this is the only way he is harming himself. It is rare that someone could live a life where he is doing well in every single area except one. It is far more common that where there is one self destructive behavior, there are others.

It’s rare, for example, that a person just uses drugs but never engages in any criminal activity. Sorry, but that’s just not facing reality. As a drug addict sinks further and further into his substance abuse, he will eventually commit some form of crime in order to feed his habit. If that wasn’t the case, our prisons wouldn’t be full of inmates arrested for committing drug-related crimes.

On a lesser scale, researchers have found that individuals with drug and alcohol addictions are often found to have gambling addictions as well. It can seem like a puzzling scenario at first. Why would someone that had an addiction to a physical substance also be addicted to a physical activity?

Part of the answer lies in the fact that there seems to be an addictive personality. This means that there are certain people that tend to get addicted to things and activities at a far greater rate than the average population. It’s not a genetic or physical disorder (as there is no blood test or other way of showing who will be an addict and who won’t.) Rather, there are certain people who seem to actively want to over-stimulate themselves.

Drugs and alcohol give an artificial push to the human nervous system. It doesn’t matter whether you’re taking a stimulant like meth or a depressant like alcohol – these substances will start to hijack your system and make you act in ways that are out of the ordinary. For many people, the most appealing part of this process is simply losing control and getting to experience the body and mind losing power over themselves.

The two activities go together, too. Researchers have found that gamblers are more likely to be alcoholics or drug addicts than the general population. As much as 75% of all gambling addicts also abuse alcohol, and 38% of gambling addicts abuse drugs.

Getting help for all addicts

It doesn’t help that many of our nations casinos exist in more rural areas that are far from treatment centers. The addictive personalities that surround these casinos are finding themselves far from the professionals that could help do something about their debilitating gambling additions and their substance abuse problems.

No matter what type of substance or activity you’re addicted to, help is available if you want it. Narconon Arrowhead exists to get every drug addict or alcoholic off of these destructive substances and back to living a happy, sober life. It can take a lot of hard work to help a person turn around when he already seems committing to destroying his own life, but the time spent is worth it. Instead of staying addicted to drugs or even gambling, every person can get addicted to really living. With the help of Narconon Arrowhead, more addicts are doing this every day.