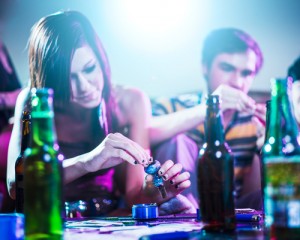 Medical marijuana laws and the recent passage of recreational marijuana laws are changing the ways that Americans look at drug use. Most of us have been taught from an early age that using drugs to get high was bad for our health. Recently, however, more and more Americans are thinking that some methods of getting high might be okay.

This is mainly due to the fact that pro-marijuana advocates have been spreading false information that makes it sound as if getting high on marijuana is perfectly safe. This couldn’t be further from the truth, and new studies are proving that fact over and over again. One new study that was just published in the New England Journal of Medicine has gone even further in showing just how much damage marijuana can do to the body and mind.

The Potential for Addiction

One common myth spread by potheads is that marijuana is not addictive. How someone that smokes weed on a daily basis could think that he wasn’t addictive is hard to imagine, but luckily we have researchers that have shown us the scientific truth. According to the recently published study, marijuana definitely has the potential to cause addiction in users. This effect is especially strong when the drug is used by young people or is smoked in large quantities.

A potential reason for today’s addictive marijuana is that the concentration of THC in marijuana (the active ingredient that gets users high) has been steadily growing. The people that grow marijuana are constantly looking for ways to breed stronger varieties of the drug that will pack a bigger punch. This leads to users getting a bigger high with just one joint, and it leads to the health risks of the drug increasing, too.

Health Risks Increase for the Young

Another major health risk for young marijuana users is that the drug impairs your judgment and motor coordination. If you smoke weed before driving a car, for example, you can be just as big of a danger to your fellow drivers as someone that is drunk. After Colorado legalized marijuana for recreational use, police started to see a marked increase in the number of “high drivers” posing a risk to others on the road.

Other health risks are similar to the risks of smoking any kind of drug. If you inhale burning smoke through your mouth and throat and into your lungs, that burning smoke is going to do damage. This is true for smoking marijuana, tobacco or any other kind of drug.

Marijuana smokers have an increased risk of chronic bronchitis and pulmonary conditions (lung problems.) These can include lung infections or even developing lung cancer.

If we want our young people to be safe from the many hazards of drug use, the answer is not to make more drugs legal. While illegal drugs definitely pose a threat to the safety and health of our communities, making more drugs legal just further increases the availability and ease of purchase for gateway drugs.

When weed isn’t giving these legal users the high it once did, they usually turn to start using even more powerful and dangerous drug. Legalizing marijuana is thus increasing the demand for other hard drugs in our neighborhoods and around the country.

Living in a safe society means that we need to educate the public on not using any drugs, even if the government continues to make marijuana legal. When no one is damaging their bodies and minds with these powerful drugs, we will all be safer, healthier and happier.