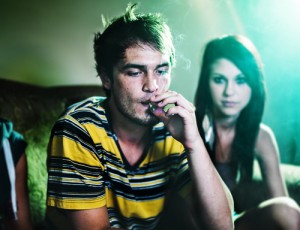 A booklet entitled Marijuana Facts: Parents Need to Know, provided by National Institute on Drug Abuse (NIDA), details the information that heavy use of marijuana can affect hormones in both females and males; noting that heavy doses of the drug has the potential to delay the onset of puberty in young males.  Additionally, it details that marijuana is capable of adversely affect sperm production.  Moreover, regular use of marijuana amongst women is capable of disrupting their normal monthly menstrual cycle as well as inhibiting the discharge of eggs from their ovaries.  With the current push to legalize medical and recreational marijuana use, it does not bode well for the health or procreation ability of our upcoming generations.

It is the first study examining how males and females react differently to THC.

The study research, done by psychology professor Rebecca Craft, found female rats to be 30 percent more sensitive to THC than males.  She found, as well, that female rats develop a tolerance to marijuana’s pain-relieving qualities more rapidly than males.  It was deduced that this could make females more susceptible to the side effects of marijuana; which include anxiety, paranoia and addiction.

The WSU research was funded in part by a NIDA (National Institute on Drug Abuse) grant, and its findings published in the Drug and Alcohol Dependence journal.

Additional findings from the TCH research done by Craft identified a distinct spike in female drug sensitivity during ovulation and at times of peak estrogen levels.

Craft identified an area which she thinks warrants further study, with researchers finding that a low dose of THC did not appear to impact the reproductive cycle in the female rats.

What does it mean?

While we trust that people are not laboratory rats, the similarities of function in living bodies allows us to extrapolate that the adverse effects of the THC on the female body, its hormones and its marijuana drug sensitivity warrants grave concern.

Nora D. Voldow, M.D., Director of the National Institute on Drug Abuse, (NIDA) notes that marijuana continues to be the most abused illegal substance amongst our youth, with 46 percent of our nation’s teen having tried marijuana at least once in their lifetime by the time they graduate from high school.

According to Volkow, despite marijuana use by teens dropping dramatically in the last decade, it is once again on the upswing; with nearly 23 percent of seniors in high school currently using marijuana; 6.5 percent of them using daily.

Tracking teen attitudes and drug use, the annual Monitoring the Future Survey shows that since 1975, the use of marijuana over time has a direct relationship to teen’s perception of its safety; with a declining  number of teens regarding marijuana users at risk of harming themselves.

Volkow expressed her concern that this perception of declining risk is occurring despite the growing scientific evidence that the use of marijuana during the teenaged years is capable of permanently lowering the person’s IG; and capable of interfering with other aspects of the person’s functioning and well-being.

Lest we not forget that it is women who are entrusted with bearing the children who will carry the human race forward; keeping our culture and our society and the future of our race alive.

That fact is a long-term look at what the potential consequences could be on a physical procreation level alone.

On a more immediate basis, there is likely no parent who would want their young son or daughter to experience the adverse effects of marijuana use as outlined in both the WSU research study and the NIDA marijuana facts booklet for parents.