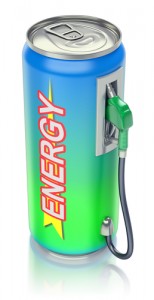 These days it seems that “coffee is all around us…everywhere we go” (to misquote an old song). It’s actually more like caffeine is all around us. Caffeine is found in many products: coffee, tea, colas, dieting products, pain relievers, vitamin waters, and even added to such odd things as oatmeal, sunflower seeds, and beef jerky. And of course, there’s the whole category of energy drinks.

Energy Drinks are Not New

a latte, mocha, or cappuccino might have between 75 to 90 milligrams of caffeine. So an energy drink could have over three times as much caffeine!

In a study done in eastern Canada by the University of Waterloo and Dalhousie University in Halifax of over eight thousand high school students, a large amount of students are using high-caffeine energy drinks. The researchers found that there seems to be a link with mental health issues, substance use and sensation-seeking behavior. The kids who used energy drinks more frequently tended to be more likely to be depressed and to have substance use like alcohol and marijuana.

Also, thrill seeking or taking part in activities that provide a lot of excitement was higher among teenagers who used energy drinks, compared to those who didn’t take them. These drinks appeal to young people because of their temporary benefits like increased alertness, improved mood and enhanced mental and physical energy.

It was also found that found that younger teens were more likely to consume energy drinks than older teenagers.

Excessive use of caffeine has negative effects on health. Combining that with the use of energy drinks and other negative behaviors in teenagers, this trend was felt to be a cause for concern. The researchers felt that steps should be taken to limit access to energy drinks by teenagers, to increase public awareness and education about the potential harm of these drinks, and to minimize the amount of caffeine available in each drink. The researchers didn’t think this would get rid of the problem completely, but it could help lessen the harm to teenagers.

The problem is, energy drink advertising appears to be directed towards teenagers and young adults. It is estimated that over 60% of energy drinks are sold to people between the ages of 13 and 35 years old. Sales of energy drinks in the U.S. rose to over $20 billion in 2013. With the marketing campaigns of these companies telling kids that their lives will be so much more exciting by using energy drinks, it can be difficult to get the word out about the harm these drinks can cause.

Big money is being made on these drinks, so big money is being spent on advertising. That is simply how business works. Energy drink companies also sponsor every daredevil sporting competition you can think of. This probably contributes to the thrill-seeking mentioned above. It is a never-ending battle that must be fought to keep parents, kids, families, and communities educated and aware of the dangers that can harm our kids. Regardless of the amount of time and effort required, we must do this.