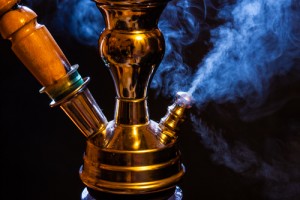 One of the fastest spreading new trends in smoking is the use of the hookah. This is a type of water pipe where users inhale burning smoke down through a container of water in order to cool it. These devices have been used in the Middle East and elsewhere for hundreds or years or longer, but over the past decade they have started to pop up all over the United States, as well.

Instead of just smoking a cigarette by yourself, part of the appeal of the hookah is that it is a more communal way of smoking. Several users will all sit around and smoke off of the multiple hoses that come off of the device. The tobacco in a hookah can last for an hour or more, giving the smokers the chance to get buzzed and converse.

While that all might sound pleasant, the tobacco being used is still a drug, and it can still deliver health consequences just the same as any other drug. Very little research has actually been done to determine what risks hookah smoking actually present, however. Now a new study at Washington State University is working to change that.

Researchers at WSU set out to find out as much as they could about hookah smoking in order to improve public health. While thousands of studies have been done on the impact of cigarette smoking, very little is known about what the tobacco in hookahs will do to the human body.

What many hookah users appear to think about the drug may be very different from reality, after all. Most casual users will probably tell you that they don’t think it’s addictive and that it’s probably not that bad for you. One of the reasons that this idea could float around is that the tobacco used is often mixed with innocuous flavors like mint or berries. When you use a hookah, you could think that you’re just having a sweet treat instead of actually smoking.

What researchers quickly found out was shocking. The truth about smoking a hookah is that one session of smoking can give you the equivalent of one hundred or more cigarettes! Even though you’re only sitting around smoking it with your friends for an hour or so, you could be inhaling more smoke into your lungs than a cigarette smoker goes through in a week. The idea that they aren’t bad for you is simply foolish.

If most of the public has now accepted that cigarettes contribute to lung cancer and lots of other physical ills, we now have to also acknowledge that smoking a hookah can be even worse for our health.

How Hookahs Relate to Weed

Another danger of smoking hookahs is the relationship the device has to marijuana. In addition to smoking specially prepared hookah tobacco, many users eventually “graduate” to experimenting with smoking marijuana through a hookah.

It’s not much of a leap of imagination, as hookahs are popularizing a form of communal smoking and marijuana is also gaining popularity in leaps and bounds in America right now. Since weed is being legalized in state after state, and hookah bars are popping up even faster, it’s almost natural for young people to associate the two.

The danger here is that marijuana can also cause lung cancer and contribute to your chances of developing psychosis and schizophrenia. If you want to ensure both your continued physical and mental health, you should stay away from marijuana and the use of hookahs.