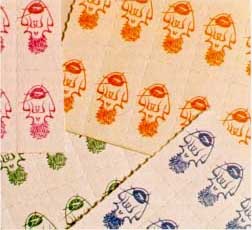 D-lysergic acid diethylamide (LSD) is the most potent hallucinogenic substance known to man. Dosages of LSD are measured in micrograms, or millionths of a gram. By comparison, dosages of heroin and cocaine are measured in milligrams, or thousandths of a gram. Compared to other hallucinogenic substances, LSD is 100 times more potent than psilocybin and 4,000 times more potent than mescaline.

LSD (lysergic acid diethylamide) is one of the major drugs making up the hallucinogen class. LSD was discovered in 1938 and is one of the most potent mood-changing chemicals. It is manufactured from lysergic acid, which is found in ergot, a fungus that grows on rye and other grains.

LSD, commonly referred to as “acid,” is sold on the street in tablets, capsules, and, occasionally, liquid form. It is odorless, colorless, and has a slightly bitter taste and is usually taken by mouth.

Often LSD is added to absorbent paper, such as blotter paper, and divided into small decorated squares, with each square representing one dose.

The Drug Enforcement Administration reports that the strength of LSD samples obtained currently from illicit sources ranges from 20 to 80 micrograms of LSD per dose. This is considerably less than the levels reported during the 1960s and early 1970s, when the dosage ranged from 100 to 200 micrograms, or higher, per unit.

The effects of LSD are unpredictable. They depend on the amount taken; the user’s personality, mood, and expectations; and the surroundings in which the drug is used. Usually, the user feels the first effects of the drug 30 to 90 minutes after taking it. The physical effects include dilated pupils, higher body temperature, increased heart rate and blood pressure, sweating, loss of appetite, sleeplessness, dry mouth, and tremors.

Sensations and feelings change much more dramatically than the physical signs. The user may feel several different emotions at once or swing rapidly from one emotion to another. If taken in a large enough dose, the drug produces delusions and visual hallucinations. The user’s sense of time and self changes. Sensations may seem to “cross over,” giving the user the feeling of hearing colors and seeing sounds. These changes can be frightening and can cause panic.

Users refer to their experience with LSD as a “trip” and to acute adverse reactions as a “bad trip.” These experiences are long – typically they begin to clear after about 12 hours.

Some LSD users experience severe, terrifying thoughts and feelings, fear of losing control, fear of insanity and death, and despair while using LSD. Some fatal accidents have occurred during states of LSD intoxication.

Many LSD users experience flashbacks, recurrence of certain aspects of a person’s experience, without the user having taken the drug again. A flashback occurs suddenly, often without warning, and may occur within a few days or more than a year after LSD use. Flashbacks usually occur in people who use hallucinogens chronically or have an underlying personality problem; however, otherwise healthy people who use LSD occasionally may also have flashbacks. Bad trips and flashbacks are only part of the risks of LSD use. LSD users may manifest relatively long-lasting psychoses, such as schizophrenia or severe depression. It is difficult to determine the extent and mechanism of the LSD involvement in these illnesses.

Most users of LSD voluntarily decrease or stop its use over time. LSD is not considered an addictive drug since it does not produce compulsive drug-seeking behavior as do cocaine, amphetamine, heroin, alcohol, and nicotine. However, like many of the addictive drugs, LSD produces tolerance, so some users who take the drug repeatedly must take progressively higher doses to achieve the state of intoxication that they had previously achieved. This is an extremely dangerous practice, given the unpredictability of the drug. NIDA is funding studies that focus on the neurochemical and behavioral properties of LSD. This research will provide a greater understanding of the mechanisms of action of the drug.

Since 1975, MTF researchers have annually surveyed almost 17,000 high school seniors nationwide to determine trends in drug use and to measure attitudes and beliefs about drug abuse. Over the past 2 years, the percentage of seniors who have used LSD has remained relatively stable. Between 1975 and 1997, the lowest lifetime use of LSD was reported by the class of 1986, when 7.2 percent of seniors reported using LSD at least once in their lives. In 1997, 13.6 percent of seniors had experimented with LSD at least once in their lifetimes. The percentage of seniors reporting use of LSD in the past year nearly doubled from a low of 4.4 percent in 1985 to 8.4 percent in 1997.

In 1997, 34.7 percent of seniors perceived great risk in using LSD once or twice, and 76.6 percent said they saw great risk in using LSD regularly. More than 80 percent of seniors disapproved of people trying LSD once or twice, and almost 93 percent disapproved of people taking LSD regularly.

Almost 51 percent of seniors said it would have been fairly easy or very easy for them to get LSD if they had wanted it.

LSD Use by Students, 1997:
Monitoring the Future Study