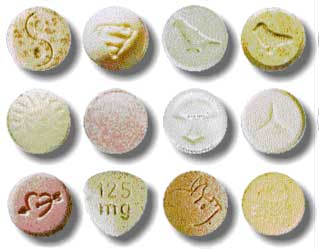 MDMA, called “Adam,” “ecstasy,” or “X-TC” on the street, is a synthetic, psychoactive (mind-altering) drug with hallucinogenic and amphetamine-like properties.

MDMA, called “Adam,” “ecstasy,” or “XTC” on the street, is a synthetic, psychoactive (mind-altering) drug with hallucinogenic and amphetamine-like properties. Its chemical structure (3-4 methylenedioxymeth- amphetamine) is similar to two other synthetic drugs, MDA and methamphetamine, which are known to cause brain damage.

Beliefs about MDMA are reminiscent of similar claims made about LSD in the 1950s and 1960s, which proved to be untrue. According to its proponents, MDMA can make people trust each other and can break down barriers between therapists and patients, lovers, and family members.

Many problems users encounter with MDMA are similar to those found with the use of amphetamines and cocaine. They are as follows:

Recent research findings also link MDMA use to long-term damage to those parts of the brain critical to thought and memory. It is thought that the drug causes damage to the neurons that use the chemical serotonin to communicate with other neurons. In monkeys, exposure to MDMA for four days caused brain damage that was evident six to seven years later. This study provides further evidence that people who take MDMA may be risking permanent brain damage.

Also, there is evidence that people who develop a rash that looks like acne after MDMA use may be risking severe side effects, including liver damage, if they continue using.

MDA, the parent drug of MDMA, is an amphetamine-like drug that has also been abused and is similar in chemical structure to MDMA. Research shows that MDA destroys serotonin-producing neurons, which play a direct role in regulating aggression, mood, sexual activity, sleep, and sensitivity to pain. It is probably this action on the serotonin system that gives MDA its purported properties of heightened sexual experience, tranquillity, and conviviality.

MDMA also is related in structure and effects to methamphetamine, which has been shown to cause degeneration of neurons containing the neurotransmitter dopamine. Damage to these neurons is the underlying cause of the motor disturbances seen in Parkinson’s disease. Symptoms of this disease begin with lack of coordination and tremors, and can eventually result in a form of paralysis.

MDMA is used most often by young adults and adolescents at clubs, raves (large, all-night dance parties), and rock concerts.

Its abuse is increasingly reported in the 20 metropolitan areas included in the CEWG.

In Kings County, Washington, a recently completed survey of young men who have sex with men showed that MDMA was among the frequently used drugs (20 percent of the sample).

In Boston, a 1996-97 survey of public schools in Boston found that about 14 percent of male and 7 percent of female 12th graders had used MDMA during their lifetime.

Information about MDMA from other CEWG areas include the following:

Each year, the NHSDA reports on the nature and extent of drug use among the American household population aged 12 and older. The 1998 survey found that an estimated 1.5 percent (3.4 million) of Americans at least 12 years old had used MDMA at least once during their lifetime. By age group, the heaviest use (5 percent or 1.4 million people) was reported for those between 18 and 25 years old.

Ecstasy Use by Students, 1998:
Monitoring the Future Study