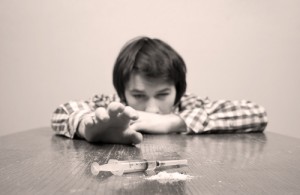 In most cases, drug use begins when an individual believes that drug substances can help them in some way.  They may be suffering from boredom, anxiety, peer pressure, emotional discomfort or physical pain, but whatever their problem they feel that drug use can help them.  The plain truth is that many of these individuals simply don’t understand drugs, what they are, how they affect the body, and what damages can result from drug use.  They believe that drug use will lead to a pleasant condition, without recognizing all the other conditions that come along with it.  However, individuals are generally intelligent when it comes to making decisions – when they have all of the relevant and factual information.  For example, if an individual knows that a house has been inspected and deemed safe by industry professionals, they are more likely to enter the house, but if they know that a house has been condemned by industry professionals, they are more likely to not only stay away from the house but also keep others away as well.  This is no less true about drug use, and a recent survey proves that drug education can successfully prevent or even end drug use because armed with the facts about drugs, most individuals wisely choose to abstain from their use.

The Successes of Drug Education

Since 1975, the National Institute on Drug Abuse has been studying the behaviors, attitudes and values of approximately fifty thousand individuals each year, including secondary school students, college students and young adults, through the Monitoring the Future survey.  The most recent Monitoring the Future survey that was released in December 2014 indicated that individuals surveyed have been smoking fewer cigarettes, drinking less alcohol and abusing fewer prescription and synthetic drugs than in prior survey years.  This includes a decline in alcohol use, a five year drop in binge drinking patterns among high school seniors, a general decline of illicit drug use over the past two decades, a decline in the perceived availability of drug substances over the past two years and more.  The survey reported that there was no increase in the use of marijuana, despite the fact that more states have legalized the use of this drug.  Unfortunately, the survey also reported that many teens have a low perceived harm of marijuana, with only thirty-six percent of high school seniors indicating that they believe there is great risk with regular marijuana use, compared to nearly forty percent in 2013 and more than fifty-two percent in 2009.  The survey also reports that past-year illicit drug use for all surveyed individuals was just over twenty-seven percent, compared to thirty-four percent in 1997.  With such a desirable trend occurring, it is important to uncover and strengthen what may be contributing to it.

Tammy Strickling, the Executive Director of the Suncoast Rehabilitation Center, believes that the decline in drug and alcohol use and abuse among young adults is largely due to an increase in drug education campaigns that help to raise public awareness and understanding of these dangerous substances and their effects.  The very fact that the perceived risk of marijuana use is declining among teenagers and young adults is proof that drug education is vital, and an ongoing project.  This is something that every parent and community should be involved in, and Strickling offers some tips for how parents can successfully talk with their children about drugs:

Drug abuse and addiction are complex problems that, while they can be successfully recovered from, take some time and effort to fully resolve.  It is far better to prevent these problems from occurring in the first place with effective drug education.