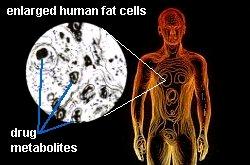 L. Ron Hubbard discovered that when a person uses drugs over a period of time, the body becomes unable to completely eliminate them all. Drugs are broken down in the liver. These metabolites (the substances the body converts the drugs into), although removed rapidly from the blood stream, become trapped in the fatty tissues. There are various types of tissues that are high in fat content, the one thing in common – and the problem that needs to be addressed – is that these drug residues remain for years. Tissues in our bodies that are high in fats are turned over very slowly. When they are turned over, the stored drug metabolites are released into the blood stream and reactivate the same brain centers as if the person actually took the drug. The former addict now experiences a drug restimulation (or “flashback”) and drug craving. This is common in the months after an addict quits and can continue to occur for years, even decades.

The Cycle Of Quitting, Withdrawal, Craving And Relapse

When the addict initially tries to quit, cells in the brain that have become used to large amounts of these metabolites are now forced to deal with much decreased amounts. Even as the withdrawal symptoms subside, the brain “demands” that the addict give it more of the drug. This is called drug craving. Craving is an extremely powerful urge and can cause a person to create all kinds of “reasons” they should begin using drugs or drinking again. He is now trapped in an endless cycle of trying to quit, craving, relapse and fear of withdrawal.

Eventually, the brain cells will again become used to having lowered drug metabolites. But, because deposits of drug metabolites release back into the bloodstream from fatty tissues for years, craving and relapse remain a cause for concern. Left unhandled, the presence of metabolites even in microscopic amounts cause the brain to react as if the addict had again actually taken the drug and can set up cravings and relapse even after years of sobriety.

1. Mental and physical cravings caused by drug residues which remain in the body.
2. The Biochemical Personality caused by drugs and the lifestyle the person adopts to get them.

Left unhandled, these manifestations will haunt a person for years even if they have sobered up. Left untreated, this will trigger a relapse. These unresolved symptoms, whether physical or mental in origin, create an underlying low-level type of stress which cannot be completely ignored by the addict. The addict can “just say no” a thousand times, but it only takes him saying “yes” one time to start the cycle of addiction again.