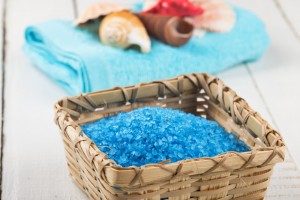 Bath Salts is one of the current designer drugs in vogue, its name taken from the real bath salts due to its appearance.  And while traditional baths salts have been used safely for centuries, first discovered by the Chinese nearly three thousand years BC, their composition and use bears no true resemblance to the illegal, dangerous and highly addictive drug which shares its name.

Bath Salts.  What are they?

Traditional bath salts are a mixture of Epsom salt, table salt and baking soda, which when added to a nice warm bath, the mixture is known to soothe sore muscles and relieve aches and pains, a very pleasant, beneficial and healthful use known by man since the time of Hippocrates.

Bath Salts, the drug, is a synthetic version of the stimulant chemical found in Khat, an Arabian and East African wild shrub, cultivated for its leaves. The leaves of the shrub, when chewed or drunk as an infusion, act as a stimulant, and are used as such. It contains different chemicals, two of which are controlled substances, cathinone and cathine.  Bath salts, then, are the synthetic, concentrated versions of the stimulant chemicals found in Khat, Methylenedioxypyrovalerone (MDPV), mephedrone and methylone.  But as with any street drug, real or synthetic, it can be cut with other substances unknown to the user, making it an even more dangerous “chemical grab bag”.

Users ingest bath salts in a number of ways, either by sniffing (snorting), taking it orally, smoking it, or putting it into solution and injecting it directly into the veins.  The effects of the drug usually turn-on 15 minutes or so after use, and the resultant high can last as long as 6 hours.

According to Poison Control Centers’ reports, effects include paranoia of a very severe nature which can sometimes cause a user to harm self or other people, suicidal thoughts, violent and combative behavior, psychosis, hallucinations, hypertension, chest pains, serious injury and death.  What will happen as a result of a person’s long-term use remains unknown at this time.  According to FOX News, and both disturbing and most unfortunate, is the increasing trend of Bath Salts abuse amongst our US military.

[For more on Bath Salts go to http://www.narconon.org/drug-abuse/effects-of-bath-salts.html]

Crystal meth has long been considered one of, if not the most highly addictive drugs, known for its brutal withdrawal symptoms and its high rate of relapse by those unfortunate enough to become ensnared in its grip, yet trying to break free.

Of great concern is that recent research by the Scripps Research Institute shows that the MDPV variety of bath salt stimulated stronger addiction-like behavior in rats than did crystal meth.  When rats were given the choice of meth or bath salts, the rats were willing to work 10 times harder for a dose of bath salts than they were for a dose of meth.  According to senior author of the study, Professor Michael Taffe, a neuroscientist at Scripps, some of the rats were willing to press the lever 3,000 times to get a single hit of MDPV.

Whatever yet remains unknown about bath salts and its long-term consequences to users, studies such as those done at the Scripps Research Institute make it very clear that bath salts are highly addictive, and with potentially long-term consequences. Also according to Dr. Taffe, earlier work done with people indicated that although a person quits using MDPV, its after-effects can persist for a long time.

For those looking for a real solution to handling Bath Salts addiction and its resultant consequences, please contact us to learn more about the Narconon Drug Rehabilitation Program, a proven treatment method which addresses the 3 Barriers to Successful Recovery: physical cravings, lingering depression, and the guilt stemming from past misconduct connected to drug or alcohol abuse.