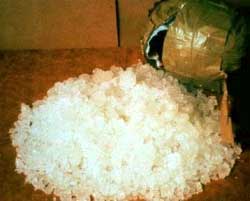 Methamphetamine is classified as a powerful stimulant drug. The drug is also known as Meth, amphetamine, speed, chalk or crystal.

The drug is very dangerous and addictive as it activates certain systems in the brain and depletes the “feel good” chemicals the brain makes naturally.

Methamphetamine hydrochloride, clear chunky crystals resembling ice, which can be inhaled by smoking, is referred to as “ice,” “crystal,” and “glass.”

The drug is sold either in a powder form as in chunks that look like small rocks. The color of this drug could be yellowish, white or brownish gray. At times some can find the drug in both orange and pink.

The drug can be taken orally (through the mouth) or through the nasal passages (snorting the drug). Users can also take the drug by injecting it and smoking it. Many users report that smoking or injecting meth gives them an intense high or “rush” when they first consume the drug. This lasts a few minutes and is often what hooks most people.

Methamphetamine is closely related chemically to amphetamine, and the central nervous system effects are similar. Amphetamine is a legal drug used in Attention Deficit Hyperactivity Disorder medications like Adderall or Ritalin. It is also used in some diet pills. However although some forms of amphetamine are legal, they are just as dangerous and addicted as methamphetamine.

What many don’t know is that meth was legal at one point as well. In 1919, the drug was first synthesized in Japan and was prescribed in the United States during the 50’s. Many used the drug to help those struggling with alcoholism but it was found that many just became cross addicted. Some also thought they could use meth to treat Parkinson ’s disease but the drug actually caused involuntary body movements.

The drug became illegal in 1986 and many make it in Meth Labs. These are labs that are created all over the country illegally to sell the drug. Many will make it by mixing over the counter medications with other chemicals.

Meth has many side effects and health hazards associated with it. Much of this has to do with the changes to the brain including the way the drug adjusts the levels of dopamine, serotonin and endorphins. As a result many users experience severe depression when coming off the drug. The other problem here is that over time, methamphetamine appears to cause reduced levels of dopamine, which can result in symptoms like those of Parkinson’s disease, or severe movement disorders.

The other problem with methamphetamine is that many who use the drug build a tolerance. This is because it takes more and more of the drug to get the same effect. As a result users may take the drug more frequently or change their method of taking the drug.

Symptoms of withdrawal include anxiety, depression, tiredness and cravings for it.

The National Institute on Drug Abuse reports that in the year 2009 there were over one million Americans that had abused meth during a one year period. In addition, a Research Report from the organization reports that a survey done indicates that at least 10 million people have tried meth at least one time in their lifetime.

At first areas such as Hawaii, as well as rural areas like Oklahoma and Louisiana were the most negatively affected by meth abuse. Today the abuse of this drug continues to spread east and both urban and rural areas are being affected by it.

Trafficking patterns for the drug have increase in Iowa, Missouri and Nebraska recently and much of the country has seen an increase in meth use even with the increase in prescription drug abuse.
It was also reported in 1992 that 5 states stated admissions for meth treatment were high. In 2002, 21 states were having problem with meth.

Narconon rehab centers and others have reported a decrease in strait meth use over the recent years. The newest trend that facilities have seen is many who are being prescribed amphetamine drugs like Ritalin and Adderall and later becoming addicted to meth.