Alcohol’s Effects on Liver Looked at in International Study 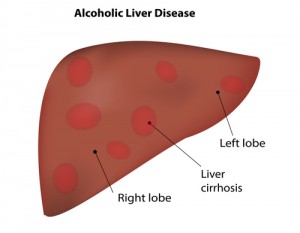 Death from liver disease is on the rise in England, and it seems to be date-coincident with earlier pub opening hours and higher levels of alcohol consumption.  Public Health England (PHE) warns people about the effects of alcohol on the liver.

Liver disease, a preventable condition, has seen a 40% increase in deaths over the past twelve years.  Public Health England revealed that men are twice as likely to be diagnosed as women.

Liver disease is fifth in line as a “big killer” in England and Wales–following heart disease, cancer, strokes and respiratory disease.  From 2001 to 2012, the number of fatalities caused by liver disease went from 7841 to 10,948.

The situation is being considered a public health priority because too many young lives are being lost with no sensible reason.  Public and health officials intend to raise awareness on the issue.

Liver disease comes on surreptitiously, showing no symptoms until the condition is irreversible.  Symptoms include weakness, fatigue, weight loss, nausea, vomiting and jaundice.

Increasing studies are being done on the effects of alcohol due to alarming statistics like those above.  Liver disease is particularly damaging because that organ is an essential component of many physical functions including digestion and detoxification.  What of other alcohol-related diseases, though?

Chronic drinking can lead to a broad spectrum of physical conditions including:

From the days of Dionysus, alcohol has been known as a double-edged sword.  As the tale goes, the Greek god of wine carried a staff dripping with honey which he used as a beneficent wand, but which also doubled as a weapon.  Following in his footsteps, alcohol begins as sweet pleasure but ends in sharp, cutting demise.

Because it is socially acceptable to drink occasionally, or even regularly, it is hard to spot alcohol addiction directly.  Its effects are there, however, if you know what to look for.

Signs of alcohol addiction include:

Oftentimes people do not realize they have a drinking problem even when it has been going on for a long time.  For many, it takes an intervention from loved ones or hitting rock bottom before they reach for help.